Bethany’s story came to light a week or so ago.  Whilst many of us in the SEN world are sickened and shocked – at the same time, we are not surprised.  I have the privilege of having her Dad’s permission to share his update.  We are all familiar with the concept of ‘meetings about me without me’… well below is a spectacular version.  Read on for a happier ending than usual.

For those who would like some background:  Beth is locked in a seclusion cell with (10′ x 12′) with one door and no window.  She is 17.  She has been in seclusion for 21 months.  Until recently she had part of a pen in her arm.  I understand that the media outcry at least resulted in this being addressed.  She has her food passed to her through a hatch.

Just a snapshot of issues can be demonstrated by these 4 tweets: 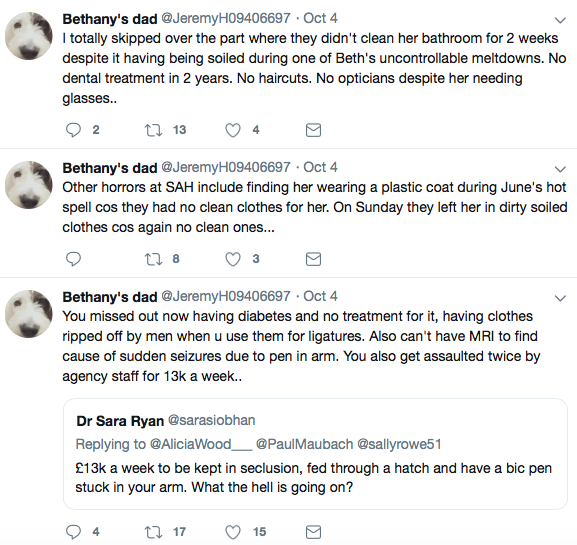 And now, here is Jez’s news:

The meeting I nearly couldn’t go to

For all the years we have been involved with our local authority’s Children with Disabilities Team, a sinister and scary occurrence regularly occurred.  It filled us with dread and fear.

Whenever we heard these two words uttered we felt a mix of emotions — unwanted, unheard, avoided, fear, excluded.

The event that caused the gamut of emotion?  The “PROFESSIONAL’S MEETING”

We were never told anything about a Professional’s Meeting, we thought of it like an enhanced version of Fight Club, not only could we not go to it, we never heard talk of it. No minutes were provided.

Odd, because I consider myself a professional.  I am an eminent expert on my daughter.  I know all of her history without looking in a file.  I know her diagnosis, not only how it presents now or during the reign of the current social worker, but how it has grown, changed, shrunk, disappeared for weeks or months over the past 18 years.  I know what works, and what doesn’t, in a range of situations, I know triggers and flashpoints and how to manage and divert them.  I have the knowledge of every placement and why it failed.  I also saw the glimmers of hope when staff did the right thing at the right time. I am after all #Bethany’s Dad.

I do understand more now after contact made through a DM on twitter enlightened me that Professional Meetings include the boring crap such as budgets, legalities, compliance etc.  But they still include discussions about our daughter’s care, and it is used to make decisions about that care.

Fast forward to my recent activities on Twitter.  A wonderful Radio 4 File on 4 documentary, Transforming Care, allowed me to tell of my daughter’s tragic existence in an Assessment and Treatment Unit, St Andrews Healthcare, in Northampton.  This became a topic of conversation on Twitter and I joined in for two reasons.  Firstly, because I wanted everyone and their dog to know what was being done to Beth.  Secondly, because I was seeing that there is a huge amount of qualified knowledge on Twitter, along with experts by experience and parents with really emotive stories like ours.  Some stories were just beginning, some had seen successful transition into the community, some were the saddest stories imaginable.  They all had one thing in common.  A massive amount of support, guidance and advice.

When it comes to my daughter my worst trait can appear — Jealousy. I wanted what they had, and I hadn’t got.  But, I’m also a bloke, who despite being 6’ 4” and regularly described as “hench”, is also shy, painfully so.  I’m the chap who will drive around and around convincing himself “you’ll find it soon” instead of asking one of the 3,000 pedestrians that I’ve driven past slowly whilst looking for road signs and landmarks.  By now they probably think I’m kerb-crawling anyway so I daren’t stop!  So instead I joined in.  I thought a mix of black, dark, depressing revelations combined with a bit of humour and irony might attract an interest and subsequent offers of help.

The first thing I learned was the D.M….apparently there are still thousands and thousands of #nicepeople in the world.  People who freely offer up their time for support and advice even when perhaps there is a chance that if the world knew what was being said, that heads could roll.

Secondly, I learned that people can direct their concerns directly at the powers that be using a single key on the phone, laptop or iPad That key is my new best friend.  He is @.

Not only that but at the same time, my new best mate could be used to pass the word directly onto those who could help…

In short, a massive amount of exposure, harassment and annoyance led to a series of remarkable events.

I was given the door key to the inner sanctum! A gold invitation to attend a Professionals Meeting!!

It was incredibly short notice, a call on the evening before the meeting took place.  I firstly accepted the offer of a phone conference as getting time off work requires notice doesn’t it?  Previous use of the conference facility in LAC reviews meant I spent most of my time saying “Sorry, I cant hear you…”  (Why was I apologising?)  “Or can you repeat that please?”  It was more akin to a phone call to my dear old Dad than effective communication.  Luckily The Boss at work was in a jolly mood as Villa had lost again, and I had pre-warned him of possible time away ( I had promised 3 days advance notice just the day before!) I finished work at 12pm and raced over to Northampton, some 65 miles away, for a 2pm meeting.

Here’s where I had a massive brain fart… Twitter is a 2 way process as explained previously, and I was DM’d a request to speak to a lady at the start of her journey into PDA.  I chatted away as the miles ticked past.  We shared stories, hurt, ideas, suggestions and contacts.  As I passed J12 of the M40 still heading south, I realised I should have exited at J15!! So 45 miles down out of 65 and still 49 to go…

Anyway, I arrived with 10 mins to spare.  I completed the security checks, as entering the hospital requires more checks than a Buckingham Palace Garden Party — rightly so too.

The meeting was held in a decent sized room and it slowly filled with faces I recognised from LAC reviews and CETR meetings.  Commissioners for all sorts of roles from NHS, L.A, Mental Health Nursing, Transforming Care etc as well as Social Workers from CWDT and Adult Services (Beth turns 18 soon so transition planning thought of — tick!) plus others whom I didn’t recognise.

When it came time to go round the room for intros I had a plan waiting..Turn after turn introduced name and role eg “Sam Smith — NHS”…  “Joe Bloggs, Walsall Social Services” etc.  Then, finally, it was my turn. I took a deep breath and stated “Jez Harris — Bethany’s Dad!!”

The huge elephant in the room that was my Twitter activity was there, admitted by me and I was proud.  Proud to have taken a stance for my little girl. AND THEN IT GOT BETTER…. LOADS BETTER!!

Firstly the room was introduced to Dr Noelle Blackman from Respond — website respond.org.uk.  There isn’t room to go into all of their amazing services but what WAS clear was she UNDERSTOOD Beth. She got Beth in a way that we have rarely seen, and never in her role as a guide to everyone working directly as well as indirectly with Beth.  Finally, an expert body involved in the planning for Beth and one that will ensure the planning is centred around Beth instead of creating a best fit.

Secondly, the two empty seats next to me were taken by a couple who introduced themselves as being from the Elizabeth Newson Centre in Nottingham.  I nearly cried right there in my seat.

For 4 years we have been begging for E.N.C. to be involved. We KNEW Beth had PDA traits years before after being sent a description of behaviours that matched Beth 100%.  At last the very centre dedicated to the Dr whom first proposed PDAs existence were in the room. Sitting next to me!!

Turns out that they too had had the same last-minute invitation that I had received and were persuaded to attend.

In my opinion, the discussions that followed changed the views of many in the room as to exactly what Beth needs. Planned staffing structures had changes suggested that will far better support her, for example, Staffing levels were initially proposed that were 3 to 1 during the day.  Nobody had considered that someone with PDA will often ‘lock horns’ with a staff member over an action or decision, and the battle can commence and Beth cannot back down.  Creating a structure that allows the staff member to withdraw, and for another to pop into place instantly will allow the diverting or distracting strategies to be deployed.

There was also an agreement that a community placement needs to be achieved for Beth as soon as its possible.  The process of identifying and agreeing the suitability of the placement will be led by the Elizabeth Newson Centre.

Beth has started to be gradually introduced to a new set of carers with the aim to have her out of seclusion completely by 22–10–18–12 days time!!  Respond will lead a process where staff from a specialist agency are trained and upskilled as well as supporting the team from SAH to work more effectively.

It was so clear that the inclusion of the ENC was a direct response from the Twitter activity.

The same goes for my own participation in the meeting. I felt respected. I felt listened to.

There is much more still to do, roles need clarifying and timescales attaching.  Funding discussions I assume will be going on, as well as legal considerations etc etc.

But its moving.  Beth IS moving.  Out of Seclusion.  Out of St Andrews, the hospital that has become her prison.

And I nearly didn’t go!!