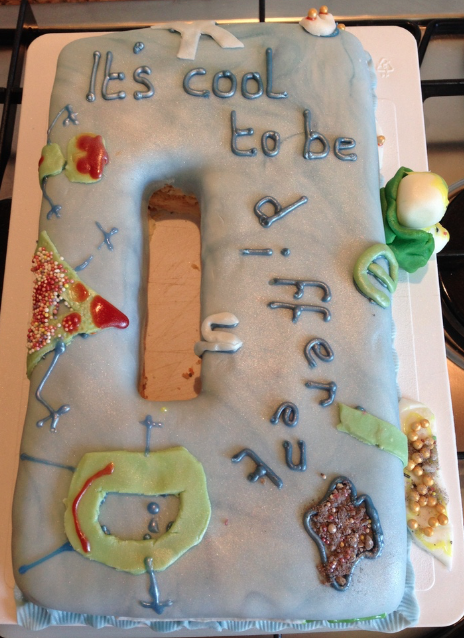 It’s Year 3.  Peter is 7.  He has Asperger’s and needs a consistent routine so we had to read every night (or not at all).  So, he had read more than many other children for a few years now.   He liked books and hated playtimes – wanted to spend them “sitting on a step looking at a book like you do in college”.  Also, we knew he was quite bright as he had had cognitive tests as part of his ASD diagnosis.

Despite all of this his reading wasn’t progressing and it felt all wrong.  He had other difficulties too and so I asked for “a full assessment of Peter’s needs” (an assessment for Statement of SEN in other words).  The Head Teacher chose to share with others that I had “made a request for an assessment by the Learning Support Team”.  I had no idea that the LST existed, or what they did, but hey ho, it was a step forward.

The Head Teacher reported to others:

“school confirmed that they don’t think this is required, however it has been arranged for Peter to be given an assessment [by the learning support team] in order to provide evidence that Peter is progressing well in school”.

The Learning Support Teacher was brilliant, kind, professional and objective.  I will always remember her.  Her assessments showed a significant discrepancy between Peter’s general ability and his literacy skills.  Her write up was thoughtful and I felt she was trying to be as helpful as her role allowed her to be.

She made loads of recommendations which were all ignored.

I was terrified of mentioning the ‘D’ word at school in-case they thought I was “chasing a label”.  I was sure there was a problem of some sort, so I started to read around to see if I was getting it all wrong; I was well aware that I really didn’t know that much about dyslexia.  I read and re-read the Government Report report by Sir Jim Rose (see here) on identifying and teaching children with dyslexia and then I left it for a while.

Midway through Year 3 Peter moved schools.  His problems were becoming more obvious and again I requested an assessment for Statement of SEN.  This time I went straight to the Local Authority.  They agreed that he should have an Educational Psychology assessment.

The results of this assessment showed my concerns were justified (see below).  The Educational Psychologist report was, however, horribly unprofessional; she recorded incorrect assumptions, contradicted herself in parts, contradicted Peter’s Asperger’s diagnosis in an indirect and underhand way, failed to reach conclusions and so on.

From reading around about dyslexia I learned that things like working memory, word reading, pseudo word decoding and so on were important to look at.  It seemed to me that in Peter’s case there was clear ’cause for concern’:

Peter’s general ability had been assessed at age 6 as being on the 86th percentile.

Six months later the Educational Psychologist had found that his levels had dropped further:

So as a lay person and a parent this seemed to me to be 1) quite a drop from the LST assessment, especially in spelling, and 2) quite a big gap between his general ability and these areas of ability – areas of ability that the Rose Report talk about being relevant in dyslexia?

As the Educational Psychologist had not drawn any conclusions I asked her about the gaps.  She said something about ‘different types of tests’.

She made a few recommendations in her report which were largely ignored.

In Year 4 Peter’s difficulties started to affect him with increasing significance.  He used pain as a way of coping with his anxiety at school, writing was more difficult and he was not with his academic peers for literacy lessons which upset him.  I spoke to the SENCO about perhaps paying for a private assessment.  My notes from the time state: ‘I was advised to be careful with regard to getting a private dyslexia assessment as “you tend to get what you pay for”’ – it was implied that I would just be buying a diagnosis.  This is despite my repeated comments that “I want his difficulties understood, and dyslexia formally ruled in or ruled out”.

Meanwhile Peter talked to his Occupational Therapist about the “Brick wall in my arm”.  Although he was referred to her for sensory processing issues she listened to him.  He told her this was his biggest problem.  Her response was such a breath of fresh air.  She listened, believed him and explored the issues.  A visual motor integration assessment was done.  The results were double checked.  The results put him on the 3rd percentile.  No wonder he was struggling.

The Occupational Therapist travelled to school to help them to understand.  I watched as his teacher threw the assessment back across the table at her and retorted “well I would have made him do it again”.

I wish that ‘people’ could realize just how hard it is for a child with dyslexia (or other similar difficulties) to manage day to day, and how having an explanation for this can help – even better if that could come with some appropriate support.

School staff decided to put Peter on a ‘boost’ programme.  It was run by a TA that Peter was scared of and whom, he felt, enjoyed targeting him.  I looked the programme up.  Its guidance explicitly stated that it was NOT suitable for children with specific learning difficulties.  Peter had to endure this programme every day and his anxiety spiralled so much that he was re-referred to a psychiatrist and started medication.

Medicated so that he could manage school.  I had been trying all I could for 2 years to avoid this.

In a state of utter desperation and as middle school was looming I submitted a carefully worded (non-nasty, non-inflammatory, but very detailed) complaint to school.  It was basically a referenced ‘plea’ for them to listen, help and to work with the Occupational Therapist and Clinical Psychologist to develop a plan that would make his transition to middle school successful.

Remember the Educational Psychologist?  Well, a later Subject Access Request (see here) revealed that she was asked by school to help them to respond to this complaint.  She seemed to advise them how they could avoid a dyslexia diagnosis.  ‘Didn’t they say his attendance was low?’ No it wasn’t…. ‘Didn’t Mum say he was anxious? oh we can’t use that as we are disputing it….?’ Are you?  You didn’t tell me!

Peter limped through to the end of Year 4 and I arranged for a private educational assessment to be done after he had had a rest and a holiday.  The Clinical Psychologist that carried out the assessment was kind, professional and everything about her practice and subsequent report oozed integrity.  She had no hesitation in advising that he had dyslexia.

She too found his general ability and verbal comprehension to be a strength at 86%.

Peter was soooo relieved.  He was thrilled to be told that he does work hard, in fact harder than most just to achieve what others can take for granted.  He wanted to throw a dyslexia party and we made a D cake!!

Peter started middle school (Year 5) with diagnoses of Asperger’s, Dyslexia, Anxiety, Sensory and visual motor difficulties.  He had some good quality helpful reports (and the EP one…) and a clinical psychologist willing to do what ever she could to help make the placement a success.

The Middle School SENCO advised me that if Peter hadn’t done the ‘Local Authority Dyslexia Pathway’ then, in this Local Authority, Dyslexia wouldn’t be recognised.  What??!!

So if ‘they’ refuse to recognise your problems, and then refuse to put you into the appropriate interventions (pathway) because of this, then even if you are diagnosed it won’t count?? Really??  Just to be clear, the SENCO wasn’t saying this was her view.  I liked her and I was hopeful she would work around this non-sense; that it would turn out to be some crazy urban myth.

Delay after delay in understanding Peter’s barriers to learning, properly recognising them and putting in place sensible support strategies took its toll.  7 weeks after starting middle school he went into seriously disturbed psychiatric state  attributed to “a magnitude of difficulties including his significant learning challenges, his sensory issues and the difficulties relating to his peers and most likely bullying.”  So this dyslexia story ends where ‘The Book – It Must Be Mum’ (see here) that describes the next instalment in the shambles of SEN provision begins.

So, in relation to dyslexia, what have I learned from all of this?

*For Example: I know of two parents whose children who were struggling turned out to be very clever (top 5%) but to have extremely low ability to process some types of information (bottom 5%).  For these children to be told, and to have it in writing that they are indeed very clever, and that they must have worked very hard to achieve what they have, was priceless.  The specific advice and recommendations have also made a big difference in both cases.

My advice?  If you think there is a problem you are probably right.  Get advice and recommendations regarding a skilled assessor – travel to one if necessary.  It will be worth it.  This group is a good place to start: https://www.facebook.com/groups/dyslexiasupportUK/

I think that there are a number of barriers to children getting the diagnosis and support they need.  One of these is that they ‘must’ fall far behind academically before they are assessed or supported.  This isn’t the case – and “How Far Behind Does She have to Be” (see here) talks more about that.

Please note that ALL children with a diagnosed SEN should have a SEN plan of support.  This plan should identify the child’s barriers to learning and the support and interventions they need to enable them to work to their level of ability.  See here for more information about this.

If you think your child needs an EHC assessment (leading to and EHCP possibly, then there is more about this here (You are Not Asking for a EHP Plan)